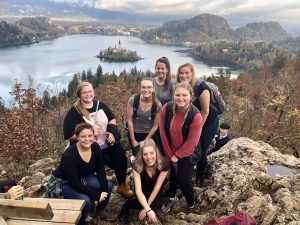 Over the past few weeks, DKIS has played host to 7 student teachers from the University of Minnesota in Duluth. We decided to ask the students, Kayla, Dani, Sammy, Courtney, Orianna, Ellie and Cailee, about their impressions and thoughts of the school. A statement that was constantly reiterated was one of the cultural diversity of the school being among the main attributes, which isn’t so prevalent back in Minnesota. When talking about learning, Ellie mentioned that she likes the programme being very student centred, and inquiry based, as opposed to most curriculums being based upon spoon feeding information to prepare for tests. Sammy, went further by saying that, “the learning here has a purpose”. Dani  suggested that students appear to be more receptive to learning because they have the opportunity to have more input into what they want to learn, they also find the subjects more accessible, interesting and beneficial. while Orianna highlighted that the diversity has taught her about different environments and cultures that she wouldn’t normally have been exposed to. In addition, Courtney emphasised that, even though they have studied the inquiry cycle, they have never seen it effectively implemented before. We thank all the students for their endeavours while in Slovenia, and wish them success in their future careers.